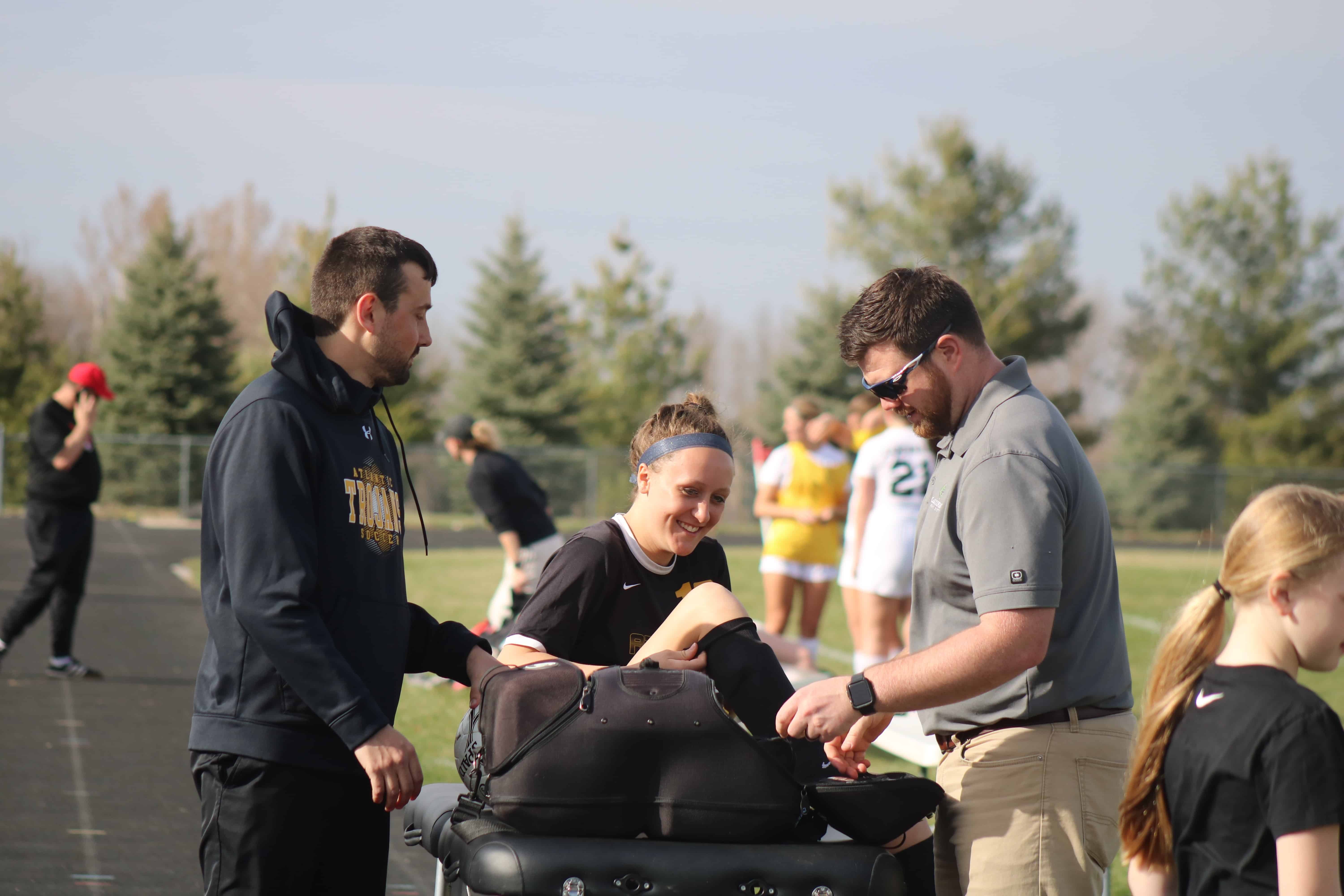 On any given day, you’ll find Andy Niemann, MS, ATC, in a CCHS operating room, in an exam room at Southwest Iowa Surgery, in the athletic training room at Atlantic High School, and on the sidelines of the big game.

“I technically have four main areas of responsibility. In the clinic at Southwest Iowa Surgery (SWIS), I function as an orthopedic tech by helping room patients, taking histories, providing patient education, teaching home exercise and therapy programs, referrals, as well as casting,” said Andy. “I also work in surgery as a second assistant to Dr. Matt Weresh during total joint replacements or other surgeries.”

Andy is also the durable medical equipment (DME) coordinator, so he oversees all of the fittings in SWIS, and manages the DME program that started in 2018 in partnership with Breg.

And then there’s his most visible role of all—as a licensed athletic trainer for AHS.

“I work in the afternoons at the high school, helping athletes from all sports and collaborating with coaches,” said Andy. “I also am on the sidelines for all home and away football games, home wrestling meets, home soccer games for boys and girls, as well as our home track and cross country meets.”

For Andy, sports have always been a big part of his life. Growing up in West Bend, Andy played football, basketball, baseball, and golf. During his football career, Andy played guard, tackle, and defensive tackle.

“Football was by far my favorite. As a player, there are a lot of life lessons that you learn on a football team. I learned a lot about work ethic, committing to tasks, hard work, being a team player, and how everyone’s role is important even if they aren’t in the spotlight.”

His team’s hard work paid off with a state championship in 2004 and state runner-up in 2005. But the lessons from his high school football coach Koy Goodchild are what still resonate the most with Andy.

“Every day he would say ‘It’s a great day to get better.’ I still use it and probably say it every day.”

His passion for athletic training was ignited when he suffered an injury. “I tore my meniscus sophomore year playing basketball, and that was my introduction to sports medicine. I realized that I wanted a career in healthcare. I originally wanted to study physical therapy, but when I found athletic training, I saw it as the perfect bridge between my desire to work in healthcare and my love of sports.”

Andy went to college at the University of Northern Iowa with his high school sweetheart, Kat. After graduating with his Bachelor of Arts in Athletic Training, the two married and moved to Indiana for graduate school. At Indiana State, Andy earned his Master of Science in Athletic Training.

Outside of work, Andy loves to spend time with his wife and three-year-old son Owen. He keeps active by riding local trails on his bike, hunting and fishing, weightlifting, and in the summer, playing first base or pitching during the local slow-pitch softball league games.

“Playing sports will always be important to me,” said Andy. “But it’s never been just about the game. Especially now, my favorite part of what I do is building relationships with the kids, coaches, and their families.”