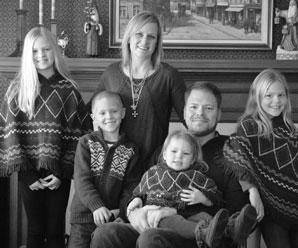 “My mom always tells me that they honestly didn’t know if I would make it, and just had to pray,” said Andrea Wiederstein, remembering her terrifying experience with meningitis fifteen years ago.

It was February of 2002, Andrea was a healthy 22-year-old, and had just returned from a 6-month stint as an au pair in Switzerland. She was working at David’s Bridal and living at home with her parents. She was dating David, who is now her husband of 14 years.

Andrea had always struggled with allergies and chronic sinus infections, and she thought she was coming down with an ear infection. She went to the doctor, picked up antibiotics, and took the first dose. But soon she started vomiting and felt increasingly ill. Initially, she and her mother thought she was having an adverse reaction to the antibiotic. But before they had time to try another antibiotic – Andrea came down with a debilitating headache like she’d never had before.

“It hurt to move, and I couldn’t get out of bed,” she said. She called her mom and said, “I think something is really wrong with me.” Andrea’s mother rushed home from work, and had to carry her down the stairs and into the car.

Andrea made it to the waiting room, and the doctor came out to meet her. “He asked me to touch my chin to my chest, and when I couldn’t move my head at all, he instructed us to get to the emergency room immediately.”

In the ER, the doctor performed a spinal tap to test for meningitis. “It didn’t hurt my back at all; the pain of being tipped upside down and the pressure in my head was something I will never forget. After that, most of it is a blur.”

She was admitted to the hospital and put in isolation. “I remember fading in and out, and that I was in a plastic bubble.” Family and friends were covered head to toe in special gowns, gloves, and masks. After 3 days in the ICU, she was moved to a regular hospital room.

While Andrea was in the hospital, there were reports of two other young adults dying from meningitis. Her family stayed by her side, and each day, thankfully, they saw improvement.
After a week in the hospital, Andrea was discharged, but her treatments were far from over. She had to inject herself three times a day with heavy antibiotics through a picc line. After three months of injections, she was able to switch to oral antibiotics until finally being given the official all clear.

Getting back to normal life was rough. Months of antibiotics left Andrea with stomach pain, and the antibiotics had killed all of the good bacteria in her digestive system. She began a strict diet to help her body heal.

She also had to adjust to living with permanent hearing loss. The meningitis caused Andrea to lose 100% of her hearing in her right ear and 40% hearing loss in the left ear.
“Unfortunately, it’s nerve damage, so a hearing aid will not help,” said Andrea. “It is always hard for my children to understand that I can’t hear them; it’s not me not listening.”

Today, Andrea and David are the parents of four children: Claire, Lila, Dane, and Marlow. Her oldest will be entering the 7th grade, and as part of the new state mandate, has to receive the meningitis vaccine before the school year begins.

“I will absolutely be vaccinating my children against this disease,” said Andrea. “I am an advocate of this vaccine and all the research that went into it. I will protect my children at all costs.”

And she tells everyone she knows the same message – vaccinate your children against this deadly disease.

“Please vaccinate your children is what I would shout from the rooftops! You don’t ever think that it will happen to you…I was fairly healthy, active, and at an exciting time in my life when it struck and could have changed my life much more drastically.”

About Meningitis
• Meningococcal disease is a broad term referring to illnesses caused by Neisseria meningitides. The two most common types of meningococcal infections are meningitis and septicemia. Meningitis infections affect the lining of the brain and the spinal cord. Septicemia affects the bloodstream. Both are very serious and can be deadly in a matter of hours.
• Even with antibiotic treatment, 10 to 15 in 100 people infected with meningococcal disease will die.
• About 11 to 19 in 100 survivors will have long-term disabilities, such as loss of limb(s), deafness, nervous system problems, or brain damage.
• Keeping up to date with recommended vaccines is the best defense against meningococcal disease.
• The most common symptoms include fever, headache, and a stiff neck
• There are often additional symptoms, such as nausea, vomiting, photophobia (eyes being more sensitive to light), and altered mental status (confusion)